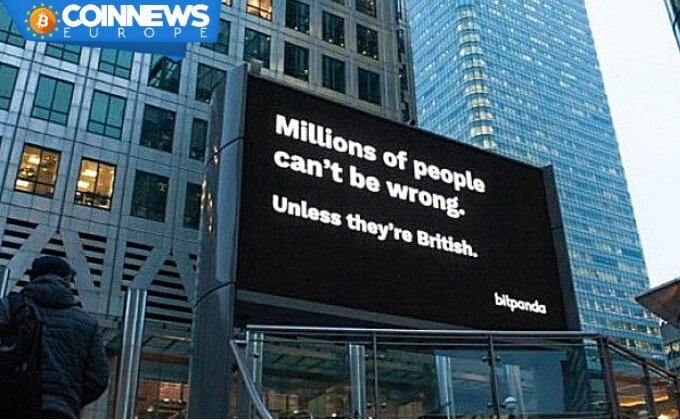 Two European technology firms have decided to use the advertising space to promote their businesses and mock Brexiteers for their decision to leave the EU. Vienna-based firm Bitpanda and Paris-based company Ledger both took out a seven metre by four metre digital billboards on January 31, the day the UK officially left the EU.

The rolling digital adverts appeared at 36 different sites around the UK on Brexit day, with the message “millions of people can’t be wrong… unless they’re British” with a second slide saying “let’s take back control, for real.”

Another appears in Brussels close to the European Union building.

Ledger’s chief executive defended the advert, saying it is designed to make a point about bitcoin, making a comparison between the Brexit movement and crypto community.

In an interview, he said:

“Brexit means taking back control over borders and currency. It’s very UK-centric. Bitcoin is the opposite. It’s a borderless, global technology.”

The firm’s boss added that on a personal level he believed Brexit was “a mistake”.

“I feel like many people do not see the great impact and were misled by the personal short-term goals of some politicians. No self-promoting politician should be a reason for anyone to be stripped of their freedoms.”

“We want to provoke people to think about the impact their vote has on their lives,” Demuth added.

Ivis Buric, a Bitpanda representative, said the company had received a copy denial from media owners in London from those who rejected using an advert with political connotations.

“Thankfully, there is still freedom of speech and advertising rules so we are live on location,” Buric added.

Twitter users have now taken to social media to express their fury over the billboards.

Another said: “I can certainly tell how potential British customers will treat Bitpanda.”

One user branded the move a “great piece of clickbait advertising.”

Another user said: “You’ve just insulted a whole load of your customers. I very much doubt all them were Remainers.”